Key risks associated with vehicles in the waste industry

The UK generates a massive 430 million tonnes of waste each year, with over 160,000 workers employed in the industry, and the waste sector is regarded as one of the most hazardous sectors in the UK.

A lot of this is due to the sheer size of vehicles in operation and the environments they work in. Workers are manoeuvring vehicles that can weigh up to 26 tonnes around tight, highly populated urban spaces, as well as driving and parking at the depot alongside other workers and vehicles. Each year there are 4,000 accidents reported and we have been talking to our customers to look at the core reasons why, and how you can mitigate these risks with our suite of vehicle safety technology.

Some of the most common and serious accidents in the waste industry occur during refuse collection, primarily involving refuse collection vehicles. The risks are magnified by a number of environmental factors, but many of them share a common theme – namely in both the vehicles and workers are in near-constant motion. Here are some of the biggest risks in question.

Workers moving around the vehicle

When they’re out on the job, refuse vehicles are rarely fully stopped for more than a few moments at a time. This means that workers are constantly moving around a vehicle with its engine on, so drivers need to be constantly aware of their surroundings and the operators working around the vehicle.

What’s more, the short distances between each stop means that refuse workers frequently mount and dismount the vehicle. Alighting therefore becomes a very specific and very tangible risk, thousands of incidents are reported each year where workers misjudge a jump, or slip, and struck as a result. Our comprehensive range of cameras and monitors provide the drivers with a vital visual aid to mitigate these risks, including our VT Overview 360°. This product uses four camera-stitched images to provide a bird’s eye view of the vehicle and its surroundings, removing any blind spots and helping drivers to manoeuvre safely. 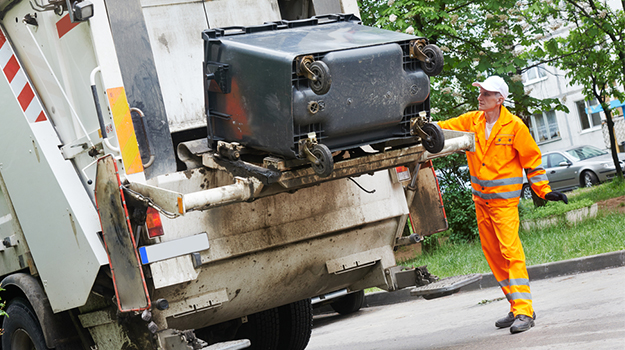 Manoeuvring can prove to be a problem on waste disposal sites, just as it can on residential roads. Once again, one of the main risks is to operators, but this risk extends to other employees too. In fact, RoSPA reports that being struck by a refuse collection vehicle is one of the most common workplace transport accidents. Our range of VT Banksman radars provide the perfect means to mitigate this – using state-of-the-art collision avoidance technology, we’ve designed them in conjunction with a number of UK councils to help reduce the risk of collisions in the workplace.

Low visibility is an issue with any HGV, which is part of the reason that the Direct Vision Standard is being brought into force later on this year. However, in the waste industry materials on waste sites can compound this issue, especially since they’re almost universally outdoors. Dust is a particular problem and can severely obscure visibility for drivers, making it necessary to go slowly and carefully. Blind spots are a particular issue for refuse collection vehicles, since their working environments not only include closed waste sites but also the open road, where they’re moving around other workers and members of the public too.

A banksman is a valuable asset to drivers, however there is still the risk of collision due to human error. This can be because the driver’s attention was focused elsewhere or because the banksman failed to stop the vehicle with their verbal or hand signals.

This is exactly the sort of problem that our VT Banksman Autobraking has been designed to solve. This award-winning system is designed to remove the risk of collisions thanks to its unique 100% accurate technology. By replacing the need for human banksmen, it removes the element of risk of human error from the process, making life easier and less stressful for drivers, and safer for their colleagues.

As with many HGVs, the size and weight of refuse collection vehicles makes them especially hazardous, and even a momentary loss of control can be dangerous. The risks are especially critical given that vehicles are usually operating in enclosed residential areas in a number of different terrains, with much higher concentrations of pedestrians and other vulnerable road users than open highways.

There have been plenty of cases where workers have left the cab without applying the park brake causing a rollaway incident, sometimes with devastating consequences. The true number of rollaway incidents which happen each year is unknown as many incidents remain unreported. However, out of the 72 known rollaway incidents (reported under RIDDOR), 8 resulted in fatalities. 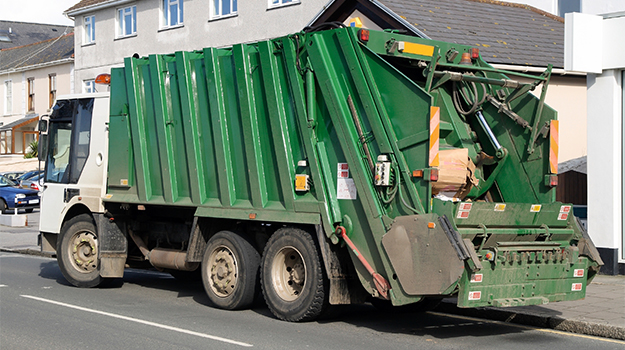 VT BRAKESAFE is our fail-safe automatic braking system that instantly applies the vehicle park brake if it is not applied by the driver should they exit the cab. This multi-award winning system receives data from a variety of inputs to ensure the park brake is engaged when it should be engaged. When the system detects that a driver has failed to apply the handbrake, it will provide audible warnings, and apply the park brake. This prevents the vehicle from rolling when parked on steep slopes, eliminating the cause of a potentially destructive accident.

There are occasions where an out of control vehicle accident can occur when the vehicle is occupied. Perhaps the most tragic instance of this is the 2014 Glasgow bin lorry crash, in which the driver passed out at the wheel. This devastating incident shocked the UK, and recommendations from the enquiry heavily influenced our development of our StopSafe system. Essentially, this allows the crew to bring the vehicle to a safe controlled stop if the driver becomes incapacitated, reducing the chances of similar incidents. This innovative braking system is the only one of its kind which has received approval from the VCA, and it was nominated for the most innovative product award from the FTA’s 2019. West Dunbartonshire council have rolled the product out across the whole of their fleet with recent news coverage from BBC Scotland and STV.

Targeted by thieves and fraudsters

Since refuse vehicles serve public-facing roles, they can sometimes be targeted by members of the public. Unauthorised use or theft of a lorry is a relatively rare occurrence, but an ever-present risk. Thankfully, it’s one that our Ident system is designed to solve, as its RFID tags prevent the vehicle from being operated without them. Our VT record system has also been designed to help avoid exactly these sorts of scenarios, capturing the moments immediately leading up to any incidents, providing valuable evidence that can help drivers prove who was at fault.

Smaller vehicles like forklifts can also present a risk to employees, pedestrians and other vulnerable road users. Given their smaller size compared to HGVs, it can be easy for some employees to treat them with less caution accordingly. This can lead to dangerous underestimations of their speed or manoeuvrability, especially if the driver isn’t fully aware of his surroundings. The power of these specialist vehicles makes them indispensable, however, they can pose a certain amount of risk to safety. Vehicles of this nature have limited visibility when carrying materials, increasing the risk of collisions with objects, vehicles or people.

Here at Vision Techniques, the waste industry is one of the key sectors we serve with our vehicle safety products, giving us plenty of specific expertise. If you’re thinking about upgrading your fleet, or you’re looking to improve safety for your drivers and wider workforce, feel free to browse our offering right here on our site, or alternatively give us a call on 01254 679 717, and we’ll be happy to help however we can!